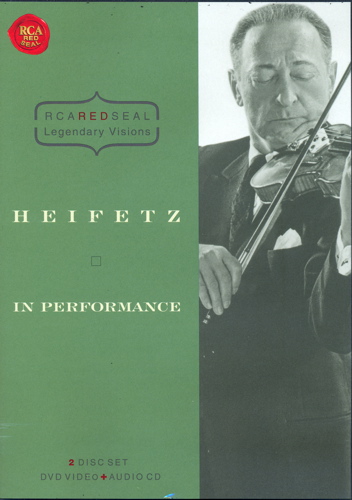 I remember very long ago when I was young I watched this particular programme about Heifetz in performance on TV. The filming of the performance of Heifetz impressed me very much, and especially so the Scottish Fantasy by Max Bruch featured at the beginning and the end of the TV programme. Later the programme was made available on video tape. But in view of the poor quality and reliability of the video tape I did not buy one. Luckily now the programme was made available in DVD format and I managed to get one, released by RCA, serial number Red Seal 82876-63885-9.

Every time I watch the DVD, Heifetz has never failed to make me feel impressed and touched. The only thing not ideal is the picture quality of the DVD. As the source is probably old and not in high resolution format, I believe nothing much can be done. 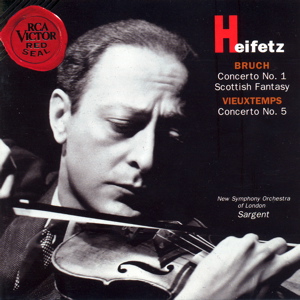 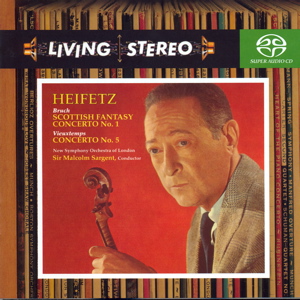 The poor quality of the DVD cannot suppress the sparks and fires of Heifetz’s performances. Heifetz’s technical skill is almost magical. His bow seemed part of his body, and he played the semi-quavers and the very difficult passages so effortlessly. When you are looking at his video on his performances, he is always so cool and so relax. Effortless is probably the only word to describe him and his performances.

Heifetz is not like many contemporary violinists, where most of them go for technically perfect presentation and with every note carefully ornamented. Heifetz, however, had always been straight forward and clean in his interpretation without adding too much unnecessary flavours into a musical piece. Yet to me his interpretation is charming and is able to win a listener over.

Maybe some will find his interpretation too technical, but I view otherwise. His coolness in performing maybe deceiving, especially so if you are watching. But if you were to listen to Heifetz’s music without looking at him performing you should realise that his interpretation is also full of feelings and warmth. I do agree some of his interpretations, like the Beethoven violin concerto, is just too fast for some to find it acceptable. But his choice of tempo in pieces like Sibelius violin concerto and Scottish Fantasy was certainly not very fast. So I believe he played fast for a reason rather than just for the sake of going fast. But I have to agree that in general his tempo is fast, and is still well within his capability. 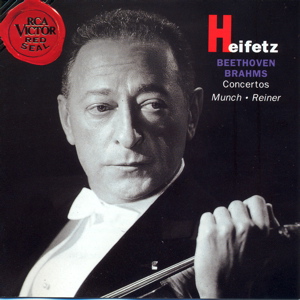 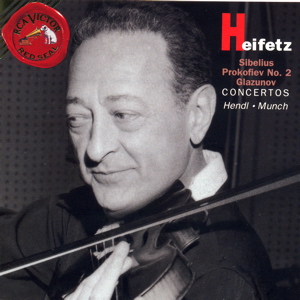 This DVD includes a few of his performances:  a live concert of him performing short violin pieces, a recording session of Bach, and a live performance of Scottish Fantasy with Orchestra National de France, conducted by Heifetz himself.

Something about the Scottish Fantasy, the key programme of this DVD. The music was composed by Max Bruch in 1980. He freed himself from the traditional form of violin concerto and created this violin fantasy in four movements, full of Scottish flavour. The harp is heard throughout the concerto, humbly supporting the Scottish themes. The music begins in a serious mood. The second movement starts to move and fills with vigour, and continuously run into the romantic third movement. The violin and the music returns to they vigour in the last movement. In this concerto the violin parts in the faster sections are like acrobats, full of excitement for the soloist, and to the audience as well.

At the end of the DVD, the ending passage of the Scottish Fantasy is featured again. The solo violin completed a slow but full of feeling phrase. After that there was a small pause of complete silence. Then we saw Heifetz’s bow went up and then down with a phrase of running notes, followed by the last statement played firmly and triumph together with the orchestra.

When done, it was the loud applause of the audience, and my tears as I am really touched! 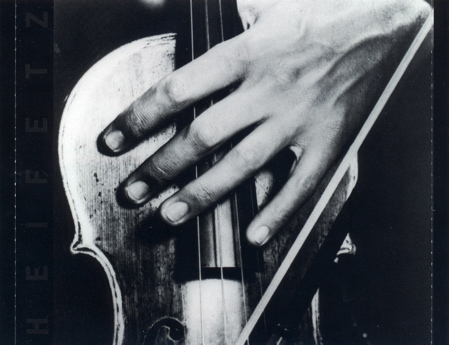